Among the most distinguishing of Jewish mitzvot is the system of dietary rules, known as kashrut. Our earlier comments regarding the difficulty of determining particular purposes for fulfilling the mitzvot are particularly apt with respect to kashrut. People who accept the Torah as divine need no rationale for kashrut, a discipline they understand to be commanded by God. Those who consider the Torah to be holy but not necessarily literally revealed can accept kashrut as a part of the Jewish way of life which can add meaning to their lives.

The word “kosher” means “proper, correct”; it is applied to religious objects or religious behavior. For example, a Torah scroll that meets all the ritual requirements is referred to as “kosher”; one that does not is spoken of as “not kosher.” The term, however, is most often used in connection with the dietary laws. Those who observe the rules of kashrut are spoken of as people who “keep kosher.”

There are those who, throughout history, have believed the purpose of the dietary laws to be a safeguard of good health. Most scholars today agree, however, that whatever hygienic advantages may have accrued to Jews from observing kashrut, they are secondary.

To the extent that we can point to an organizing principle to explain the rules of kashrut, the one which appears to have the firmest grounding is, in the words of Rabbi Samuel Dresner, not health, but holiness.1 The biblical passages which present the basis of the laws of kashrut are often followed by statements that imply that these laws are part of the discipline expected of a holy people. For example, in chapter eleven of the Book of Leviticus, forty-four verses of instruction about dietary laws are followed by the statement: “I am the Lord your God; sanctify yourselves therefore and be holy, for I am holy” (a restatement of the passage quoted earlier in this chapter).

Kashrut is, then, a dietary discipline undertaken not in order to lose weight, not in order to become more attractive, not even to promote health, but to help infuse all of life with a sense of holiness.

One way in which it can achieve this goal is through refining the practice of making distinctions. Kashrut can help us shape a way of life that is marked by distinctions: between the permitted and the forbidden, the sacred and the profane, the good and the bad. Distinguishing between permitted and prohibited foods can be part of a total way of life that constantly helps us refine our sense of control over our passions and desires.

Although only a few teachers of Judaism ever went so far as to promote vegetarianism, the Torah implies that it is an ideal. In the Garden of Eden, Adam and Eve ate no meat. After the Flood, the permission granted Noah to eat meat seems to be a concession to human weakness. Animals are also creatures of God. If we take their lives for the sake of our own sustenance, we are obliged to do so in a restricted way, one in which the animal experiences a minimum of pain. This is one of the ways in which Jewish tradition teaches reverence for all life.

If an animal is to be slaughtered, this must be done in the manner prescribed by Jewish law. The slaughterer is called a shoh?et. The shoh?et must be knowledgeable as well as pious. The sharp knife he uses must be tested periodically for nicks and dullness. He must know enough about anatomy to insure a minimum of pain to the animal, as well as to detect the slightest malfunctioning of an organ, because the flesh of an animal that was diseased or had certain types of blemishes may not be eaten. If there is any question, a rabbinic authority must be consulted to decide whether or not the meat may be used. Forbidden food is designated taref or tereifah, often pronounced treif. (The word literally means “torn to pieces,” and originally referred to the flesh of animals which had died as the result of an attack, the eating of which the kashrut laws forbid.)

Eating blood is forbidden. Blood is blood, whether it comes from a human being or an animal. In prohibiting the consumption of blood, the Torah seems to be concerned that it can excite a blood-lust in human beings and may desensitize us to the suffering of human beings when their blood is spilled. In the passage in which the prohibition against eating “flesh with its life-blood in it” is first found we also see the prohibition against murder: “Whoever sheds the blood of man/By man shall his blood be shed” (Genesis 9:6). Because life-even an animal life-is sacred and “the life of the flesh is in the blood” (Leviticus 17:11), the blood of animals must not be eaten; it must be disposed of carefully.

Meat is rid of blood by soaking it in cold water for half an hour in a utensil used only for this purpose. It then is sprinkled liberally with salt and drained on an inclined, perforated board for an hour. After it is rinsed with cold running water, it is free of blood. This may be done at home, though generally today it is done at the butcher shop. Liver or steaks that are to be broiled need not be salted; they need only be rinsed with cold water and placed over or under an open fire.

As stated in the Torah, the meat of certain animals may not be eaten. Land animals must have cloven hooves and chew their cud; this eliminates the flesh of pigs and rabbits, for example. Birds of prey and certain other kinds of fowl are prohibited. Fish must have fins and scales. Other seafood, such as eels and shellfish, are treif.

Kashrut requires the separation of meat from milk. The basis for this is a passage in the Bible (repeated three times) that prohibits the boiling of a calf in its mother’s milk. The rabbinic tradition expanded this prohibition to forbid cooking or eating milk or milk products together with meat or meat products. All dishes, utensils, serving dishes, sponges, and dish towels used for meat must be totally different and separate from those used for milk. Meat and meat derivatives are commonly referred to by the Yiddish word fleishig. Milk and milk products are commonly referred to as milkhig. In kosher homes, different colors or different markings help to differentiate the two sets, often red for fleishig, and blue for milkhig.

Some foods are neither fleishig nor milkhig. They are called pareve. Fruit, vegetables, grains, fish, and eggs are pareve. They may be eaten with either milkhig or fleishig foods.

Although it is permissible to use one set of glass dishes for both milkhig and fleishig (because they can be thoroughly cleaned and are not porous), the practice is not encouraged as it does away with the idea of separation which is an important aspect of kashrut.

Keeping a kosher home appears complicated to the uninitiated. One soon, though, becomes accustomed to reading labels in the supermarket to make sure that packaged goods that appear to be kosher really are. This may seem difficult. How can one be sure, for example, that baked goods were not cooked with lard or beef suet? How does one determine which products have milk or milk derivatives in them? How does one know which products are truly pareve?

The answer, though, is really quite simple. One determines whether a product is kosher, and if so whether it is pareve, milkhig or fleishig, by looking for a rabbinic certification on the product’s label. Such a certification is known as a hekhsher. Several well-known national certifications can be found on literally millions of products produced today. As recently as twenty years ago, one would be forced to examine ingredients on labels; today, this is generally no longer necessary.

Kosher meat is more expensive than non-kosher meat, among other reasons because more people are involved in producing and inspecting it than is the case for other meat. Those who keep kosher believe the observance to be so important that it is worth the expense.

Eating out in non-kosher restaurants or in the homes of people who do not keep kosher causes some difficulties and challenges. Some Jews will not eat anything from plates in homes or restaurants which serve non-kosher food. This standard renders it unlikely that one will consume non-kosher food, though it does limit one’s ability to interact socially with those who do not keep kosher. Others, in order to participate more fully in the general community, adopt a more lenient legal position. Some will eat only cold fruit, vegetables, or salad in non-kosher homes or restaurants. Others will eat even hot, cooked food, but will insist upon non-meat products, such as pasta, broiled fish, or vegetarian dishes. Such a standard of kashrut observance requires, though, considerable vigilance. Not everyone, for example, has the same understanding of the term “vegetarian.” One might need to inquire, say, that a so-called vegetarian soup is not made with chicken stock, or that a seemingly innocuous salad does not contain shrimp or other non-kosher products.

This suggests that adopting a commitment to keep a kosher home and eat only kosher food requires one to discuss it with family, friends, and acquaintances. It does distinguish one from others. It does make one different.

A commitment to eat only kosher food provides a constant reminder of the covenantal nature of Judaism. Every time a choice must be made whether or not to eat certain foods, one is reminded that one is a Jew. Sometimes one must remind others that one is a Jew. One has the opportunity to think about one’s faith, one’s identity, and one’s character several times a day.

Article reproduced with permission from the Rabbinical Assembly. Originally published 1999. 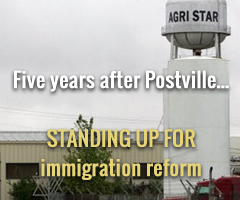 See our Certification Standards
for the Magen Tzedek Service Mark.

By making a donation, you can make a difference in the lives of people, animals and the Earth. Learn how.